In recent years, hyperbaric oxygen therapy has been promoted as an anti-aging remedy because of its ability to stimulate the production of new skin cells and improve the quality of existing skin cells.

The effects of aging on the skin can be due to many factors, including sun exposure, smoking, and pollution. As we age, our skin loses its elasticity and becomes thinner. It also becomes less able to repair itself after being damaged by environmental factors.

Oxygen is a key component in the process of cellular respiration and is essential for life. Oxygen helps keep cells healthy and is essential for a healthy immune system. This article will explore how oxygen can reverse aging by increasing cellular oxygenation and reducing oxidative stress in the body which leads to better skin health.

How Can Oxygen Reverse Aging?

Oxygen is a gas that is required by the body to maintain life. It is used by the cells of our body to produce energy. The human body needs oxygen in order to function properly and maintain life. The air we breathe contains many different gases, including oxygen. When we breathe, oxygen moves from the air through the nose or mouth into our lungs and then travels into our bloodstream where it reaches every part of our body.

Oxygen Therapy, also known as Hyperbaric Oxygen Therapy or HBOT, has been used to treat various diseases and disorders for more than 100 years now. In recent years, HBOT has also been used to reverse aging and slow down its progression.

The theory behind hyperbaric therapy is that it forces more oxygen into your body than you would get at sea level. This increase in oxygen will help your body heal faster and more effectively.

The therapy is easy to use and does not require any medications. One of the reasons why it is so popular among patients is that it does not have side effects or have any risks of complications, unlike some other types of treatments.

Many people are interested in the benefits of hyperbaric oxygen therapy. This type of treatment has been used to treat many conditions and diseases. Some believe that it can reverse aging.

The theory behind this is that because the body’s cells are continuously dying and being replaced, eventually, your cells will stop producing enough energy and die. Hyperbaric oxygen therapy is reliable to stimulate stem cells in the body to produce more energy-producing mitochondria, which can help slow down or even reverse aging.

“In the current study, researchers wished to examine the impact of HBOT on healthy and independent aging adults, and to discover whether such treatments can slow down, stop or even reverse the normal aging process at the cellular level.”[1]

A Study: The effect of hyperbaric oxygen therapy on the pathophysiology of skin aging[2]

Methods: The study was performed as a prospective clinical trial. the subjects were assigned to a three-month control period followed by three months of HBOT daily sessions.

Conclusions: The study indicates, for the first time in humans, that HBOT can significantly modulate the pathophysiology of skin aging in a healthy aging population. The demonstrated mechanisms include angiogenesis and senescent cell clearance. 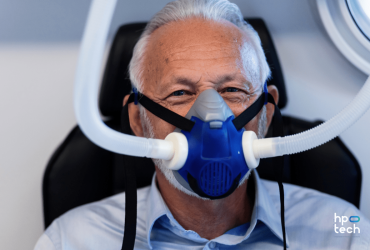